Two graduates of BIRN’s Summer School have created a stir with a report about a mass grave that was dug by Dutch soldiers in Srebrenica at the time of the July 1995 massacre. 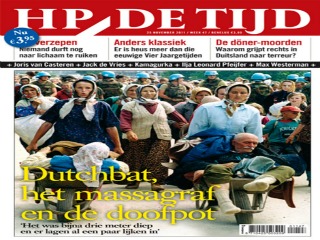 Reporters Zvezdana Vukojevic and Eldin Hadzovic were able to pinpoint a site where at least five bodies had initially been buried. The remains were later moved to an unknown location.

Dutch soldiers have said they dug the grave as an “emergency” measure during the massacre of more than 7,000 Muslim men and boys by Bosnian Serb forces.

A Dutch military report said between five and nine bodies were buried together but Bosnian sources say the figure might be higher.

The article was featured on the cover of HP/De Tijd, an influential Dutch news magazine. It was also picked up by more than 40 media outlets in the country.

The events in Srebrenica in summer 1995 continue to provoke intense debate among the Dutch. The failure of the country’s contingent of UN peacekeepers to prevent the killings has led to inquiries and the fall of a government.

The Dutch state has taken “responsibility” – but rejected “blame” – for the killings. Ratko Mladic, the former Bosnian Serb commander accused of ordering the attack, is currently on trial for war crimes in The Hague.

Zvezdana Vukojevic and Eldin Hadzovic are based as journalists in the Netherlands and Bosnia respectively. They hit upon the idea for the report during the BIRN Summer School of Investigative Reporting.

Their article relied on information given by witnesses who had served in the Dutch military, and by a woman whose infant is believed to have been buried in the mass grave. The child was stillborn during the last days of the enclave, as it fell to Bosnian Serb forces.

The article was produced with the support of SCOOP, a network for investigative journalists in Eastern and South-eastern Europe. The first English version of the report will be published by Balkan Insight, BIRN’s online news service.