Journalists can only combat corruption in the Balkans through indepth investigations – though few reporters have the time or resources for such work, a round table at BIRN’s Summer School in Macedonia heard. 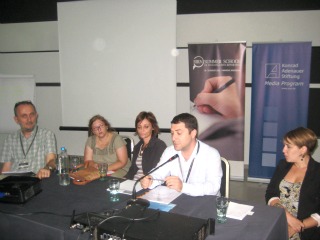 The panel debate, named “Investigating Corruption in the Balkans”, was part of the third BIRN Summer School on Investigative Reporting that is currently taking place in the Mavrovo mountain resort of western Macedonia.

German Filkov, head of a Macedonian anti-corruption watchdog, Center for Civil Communications, CCC, which follows media coverage on corruption, says that “the only way reporters can fight corruption is through investigative journalism”.

But their survey conducted inMacedonialast year showed that only 4 per cent of all media reports on corruption were investigative stories, all the others being short news, barely scratching the surface.

He also said the Macedonian state was slow to react to media reports on corruption.

“When in 2008 and 2010 we looked at how many cases the state prosecution had launched based on journalistic stories, the number was zero,” Filkov said.

Dragana Babovic, from the Montenegrin magazine Vijesti, said thatMontenegrohad taken some institutional steps towards boosting the fight against corruption and organized crime.

However, she noted that progress was not uniform. “Since 2007 we have had cars burned, staff beaten and all of these cases have not been solved,” she said.

“We have also had examples of state institutions, like the police or the prosecution, abusing their position and silencing reporters who investigate high-level corruption, involving top politicians, tycoons and office holders,” she added.

Lawrence Marzouk, editor of BIRN’s Pristina Insight newspaper, stressed that the media in the Balkans are often censored by power holders who resent investigative reports into corruption.

“Many long-term investigative researches have been initiated by NGOs, not by the media themselves,” he noted, adding that journalists who are overstretched by daily reporting tasks do not have an environment to conduct serious research.

But, he said, “Sometimes the media may harm the process when they discover some criminal practice and publish it outright, thus undermining our own investigation”.

Calling for greater collaboration between journalists and the prosecution offices, Djuricic said that his office in Croatia was fully independent from external pressures when it came to launching indictments.