More than 20 journalists from all over the world are taking part in BIRN Summer School of Investigative Reporting at Lake Mavrovo in Macedonia. 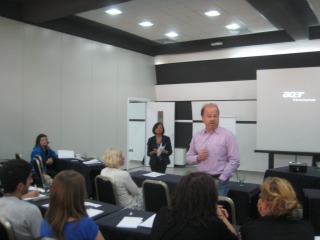 Sheila Coronel, director and professor of Professional Practice at the Toni Stabile Center for Investigative Journalism, opened the third annual BIRN Summer School explaining what investigative journalism is and how to conceptualise an investigation.

Marcus Lindemann provided insights into the use of modern, online tools for information gathering.

Lindemann, an executive producer and journalist from Germany whose reports often appear on ZDF, Europe’s largest TV station, introduced journalists to a range of ways of finding information online, beyond doing searches on Google.

The principal focus of the BIRN Summer School is the reporting of organised crime and corruption for print and broadcast media, but the school will also cover the issues of censorship and self-censorship in the Balkans.