Paul Radu on Tuesday told BIRN’s Summer School of Investigative Reporting participants how to track down the real owners of offshore companies. 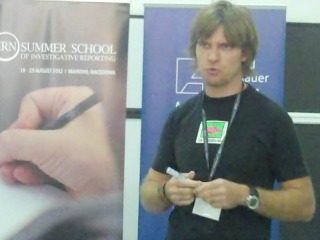 Paul Radu, executive director of the Organized Crime and Corruption Reporting Project, told the summer school how to break down the walls of secrecy surrounding offshore companies and find the people behind the companies.

“Offshore companies offer tax optimization and secrecy to their owners. Tax optimization is legal, although some may argue whether is it moral. But I will tackle secrecy, because secrecy is what feeds corruption,” he told his audience in Mavrovo, in Macedonia.

Radu explained how to gather publicly available information about companies and how to identify the true owners of offshore companies by comparing data.

He also informed journalists about the project named Investigative Dashboard that provides free assistance to journalists in dealing with ownership structures of offshore companies.

About 20 journalists are taking part in third annual BIRN Summer School, which started on Monday, August 20.