On the third day of BIRN’s Summer School, journalists heard how to conduct interviews and investigate offshore industries. 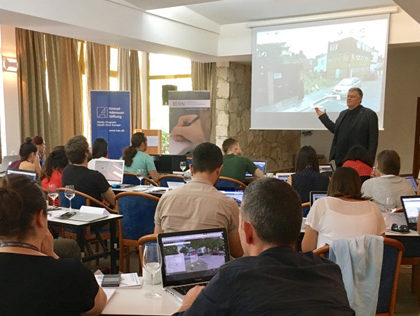 On day three of the BIRN summer school in Dubrovnik, Blake Morrison, the lead trainer and investigative projects editor at Reuters, held a session on the “art of interviewing” and on how to convince difficult sources to talk, describing interviews as a crucial component of the journalistic job.

The task was “how to get the information from the people. And to do it ethically,” he said.

“My philosophy on interviewing is pretty simple… Think of it as a blind date,” he noted,  explaining that the interviewee needs to “be understood.

“It’s very important to be curious. If you don’t understand something, don’t presume, ask,” he continued.

Morrison emphasised the need for preparation and gave insight into why some people agree to give an interview: vanity, the need to be understood, self-interest, desperation, guilt and curiosity.

“I really believe as a journalist is that our commitment to honesty is crucial,” Morrison said.

The workshop on data journalism and using advanced internet research continued on Wednesday.

Henk van Ess, who works with a number of European media outlets, as well as Bellingcat, continued his training on data journalism, answering questions from the participants through stories he has covered over the years.

He showed the participants how to use open sources and social media for their investigative stories, showing the example of the work he did in tracing the ISIS executer, Jihadi John.

Miranda Patrucic, an investigative reporter and regional editor with the Organized Crime and Corruption Reporting Project, also held an interactive lecture on how to “follow the money” and how to investigate offshore industry.

She conducted an exercise on tracking money and on shell and shelf companies through various databases, both open-source and paid-for.

“Many of offshore companies have a legitimate purpose in the business word, however, they could be manipulated by criminals to hide their crimes, money laundering,“ Patrucic observed.