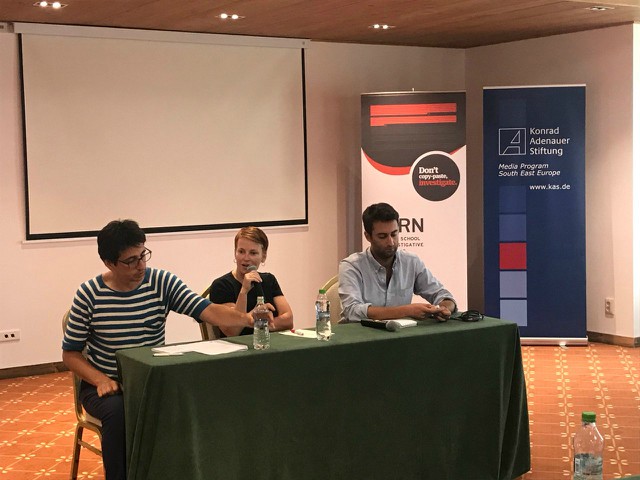 Politicians in various European countries have insulted and discredited journalists, populism is on the rise, the press is vilified – and it has led to the creation of an environment in which two journalists were killed in just four months in two European Union states, Malta and Slovakia.

“We’ve pushed the boundaries of our profession and are holding people accountable in ways that were not possible before. This brings new dangers,” Caruana Galizia explained. “As a journalist, if you’re good, you’re at greater risk,” he added.

Holcova, a journalist with the Czech Center for Investigative Journalism, spent a month under police protection and had to cut communications with family and friends, after her co-worker, Slovak reporter Jan Kuciak was shot together with his fiancée at their home on February 21, 2018.

Holcova and Kuciak worked together in collaboration with the Organised Crime and Corruption Reporting Project, OCCRP, on an investigation into links between the Slovak government and Italian organized crime.

Slovak police also interrogated Holcova for eight hours and confiscated her cellphone. However, she said, the investigation hasn’t made much progress, despite pressure from the public in Slovakia.

“There is no information coming from the Slovak police. The only info we get is that the investigators are making mistakes,” she said.

She believes that investigative journalists risk their safety when pursuing a story and that they need to spot the signs of threats, such as being followed.

Galizia explained that both he and his mother were followed for months by her assassins.

“I had this feeling that my mother was being followed,” he said. “I woke up every day and told myself to check the bottom of the car. I did not check that morning,” he added.

After his mother’s murder, Galizia quit working as a journalist and focused on advocacy. He is now working on ways to protect journalists from violent attacks and on legal ways to pressurize government into respecting the freedom of the press.

Holcova also said that regaining the public’s trust and support is also important for journalism.

“We can’t rely on international bodies, but we need to regain the trust of the public, because without us the people in power would not be accountable for their actions,” Holcova said.