After a week-long training programme in investigative reporting, the journalists at the sixth BIRN Summer School presented their own ideas for stories. 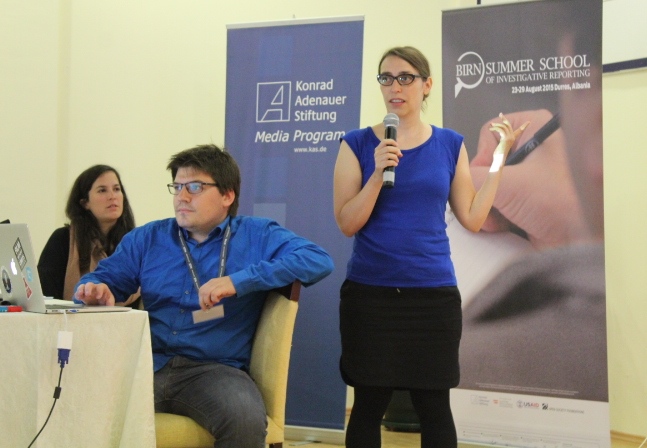 The final lecture at this year’s Summer School in Durres, Albania, was given on Friday by Vladan Joler, associate professor and chair of the New Media Department at the University of Novi Sad, Serbia.

Joler give a lecture about networks, data mining and data visualisation methods for investigating invisible internet infrastructures, data flow and online surveillance, and also explained how browsers and internet applications collect information on their users.

After his presentation, the participating journalists presented ideas for investigative stories that they had developed over the previous four days.

The journalists split into several groups and presented story ideas about the immigration issue in the Balkans, legal migration from Balkan countries, radical groups in the Balkans, people trafficking, the privatisation of public companies and quality controls on food.

Each group outlined how they planned to undertake their research and data collection.

A jury will now select the top two or three stories from the participating teams of journalists, who will be funded to develop their ideas.

During the five-day training programme in Durres, around 30 journalists from Serbia, Croatia, Bosnia and Herzegovina, Albania, Macedonia, Bulgaria, Austria, Kosovo, Palestine, Germany and Georgia learned from leading media experts how to use social media to uncover crimes, skills for cracking open offshore companies and how to make reluctant sources talk.