Investigative journalists don’t have to cut emotion out of their story as the story is dead without emotions, journalist and trainer Mark Lee Hunter told reporters attending BIRN’s Summer School of Investigative Reporting. 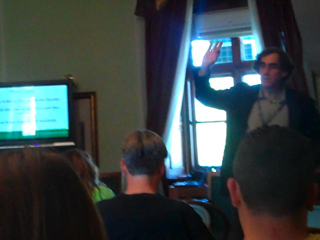 He explained this by saying that world is garbage and that is on journalists to clear it up, a little bit at least.

“We are not going to do that if nobody cares. If we want it to care, we have to give them some emotion. This is the way it makes me want to do the job,” Hunter explains.

It is believed that investigative reporting takes too long and is too expensive. Hunter, however, believes it is true but it doesn’t always have to be true. “One of the reasons for that belief is because we work in inefficient ways… Our processes are terrible, we do not have professional processes for the most part but personal ones. So it is very hard to go faster,” he said.

Pointing at some methods the journalists should develop in order to do their job faster, Hunter added: “I promise that if you develop personal method and you are conscious about reproving it, you will also go faster.

He has also talked about using hypothesis and chronologies to frame and advance a project.

“Journalists make chronologies all the time and every time you get a piece of information, you add it to the chronology,” he said.

According to him, the chronology can help journalists in two ways:

1. It keeps track of all journalist’s information, it keeps all the stuff together.

2. It suggests relationships between the facts, what to look for next.