Journalists in the Balkans are coming under increasing pressure from politicians and business people, media experts have told participants of the BIRN Summer School of Investigative Reporting. 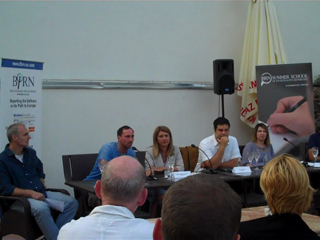 Speaking at a panel discussion named Journalists Under Attack that was organised as part of the BIRN summer school, Dragana Nikolic Solomon, OSCE Head of Media Department, said that according to the research of the OSCE for 2009, the number of physical attacks on journalists has dropped down but what is also worrying is the increasing influence which comes from the fields of politics and business.

According to her, after attack on a journalist of the Serbian weekly newspaper Teofil Pancic, police stance towards journalists has changed in the country.

“It’s certainly a good sign, but what is worrying is that the attackers on Pancic were young, 18-20 year old guys,” she added.

Teofil Pancic of the weekly magazine Vreme, was attacked while travelling on a public bus in the Zemun district of Belgrade July 24.

As for Montenegro, Ivanovic said that there is a strong government’s influence on the media and that solidarity exists only among non-regime media houses in the country.

According to Jeta Xharra from BIRN Kosovo, solidarity in Kosovo exists while drinking in cafe but in public… there is very little.

“The government goes so far as to exercise influence on journalists’ organisations so that they are politicised,” Jeta explained.

“They [journalists’ organisations] react only when it comes to a journalist they like while some do not react at all or turn them to a lot of time, as was the case with us [BIRN Kosovo], continues Jeta.

According to Jeta, there are no attacks on journalists in Kosovo so the biggest problem of Kosovo journalists is the fact that the ccountry’s government is discrediting journalists in every possible way by publishing lies about them and so on.

Case of Ivo Pukanic, who was publisher of the Croatian weekly Nacional that was murdered in 2008, has also been at the table of the discussion.

Hrvoje Appelt said that the Croatian police had reacted but it was necessary for Pukanic to be killed in order for that to happen.

“I have to say that, not only in Croatia but also throughout the region… for which I’ve been working on statistics of attacks on journalists…three years ago attacks on journalists on daily basis were happening. In 99 per cent of these cases, the attackers have not been found yet,” Appelt said.

Cvorovic from the Serbian media outlet B92 has been talking about the case of Brankica Stankovic, who is author of the show Insider that had received death threats posted on Internet websites after airing of the show on the Serbian hooligans last December.

Since then, Stankovic is under 24/7 police protection. However, according to Cvorovic, B92 has found a solution and a new concept so that the airing of the programmes could continue.