Journalists in the Balkans must band together to defend freedom of speech against a range of political and economic pressures, a BIRN round table on Monday in Macedonia heard. 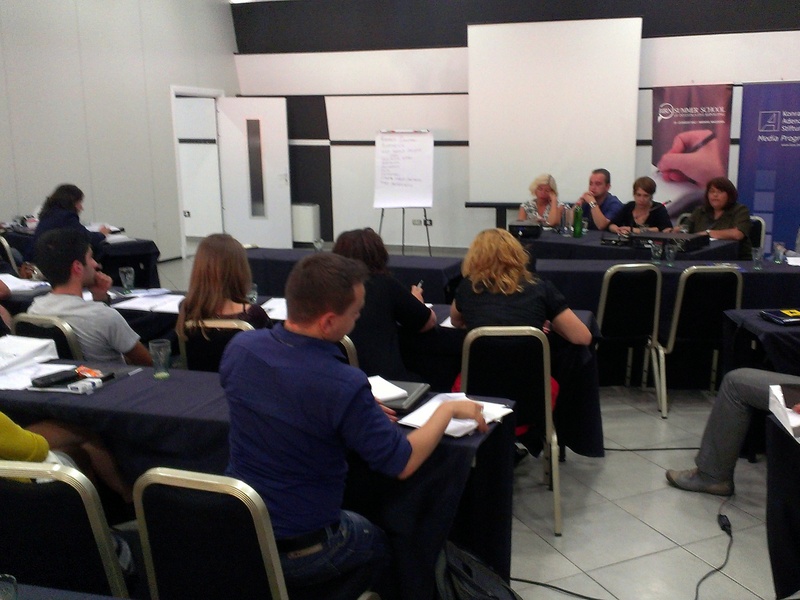 The panel debate, titled “Censorship and self-censorship in in Balkan media – The enemy within ourselves,” was staged as part of the third BIRN Summer School of Investigative Reporting, in cooperation with Konrad-Adenauer-Stiftung, which is taking place in Mavrovo, western Macedonia.

BIRN’s regional director, Gordana Igric, presenting an overview of the state of media freedom in the Balkans, said that
problematic media ownership by business and political tycoons was the source of much of the present censorship and self-censorship.

“Maybe we can do little against censorship but we can do something more against self-censorship,” she said, “which means activism, designing something to help journalists individually through a union, and providing other support and training.”

Igric advised Balkan journalists not to succumb to a common but mistaken belief that the European Union is going to help them against local strongmen who are suppressing free speech.

“Journalists in the Balkans have a romanticized view about the EU, that there is still somebody there who cares about freedom of the media, but practice shows that this is at the back of the list of their priorities,” Igric said.

Tamara Causidis, head of the Union of Macedonian Journalists, said that Macedonia faced “very vulgar, brutal and undisguised censorship, both political and economic”.

She said that censorship, self-censorship and negative selection were the prevailing trends in Macedonia’s media due to the widespread fear among journalists that they may be laid off if they report on controversial issues.

“We have examples where reports in the media are edited by marketing persons who sit in the board rooms,” she complained.

“Any attempt to counter such practice is prevented by the argument that the media outlet would be closed if this is not done, or that they [the journalists] will be fired.”

Arben Ahmeti, head of the Kosovo Association of Journalists and a reporter for the Kosovo newspaper, Koha Ditore, warned that in Kosovo, “where organized crime is the dominant force … journalists lose their power.

“We are trying to organize journalists. We should keep working together to find alternative ways [to avoid censorship],” Ahmeti said.

Mark Schoofs, veteran investigative journalist for the Wall Street Journal and editor at the US based ProPublica media organization, said censorship and self-censorship were not limited to poor, corrupt countries but were common in wealthy societies with long democratic traditions as well.

He urged reporters to take a more active role in their societies.

“When a situation in the country is dire, journalism is not about whether every report is perfectly balanced. We should not be afraid to defend an angle and have our own view,” he said.

“Journalism and activism has a place and is important [though] it does not mean that you write lies,” he added.