Nick Davies, the Guardian journalist widely recognised as one of the world’s best reporters, told journalists at BIRN’s Summer School they must be vigilant for ‘hang-on-a-minute’ moments if they want to uncover great stories. 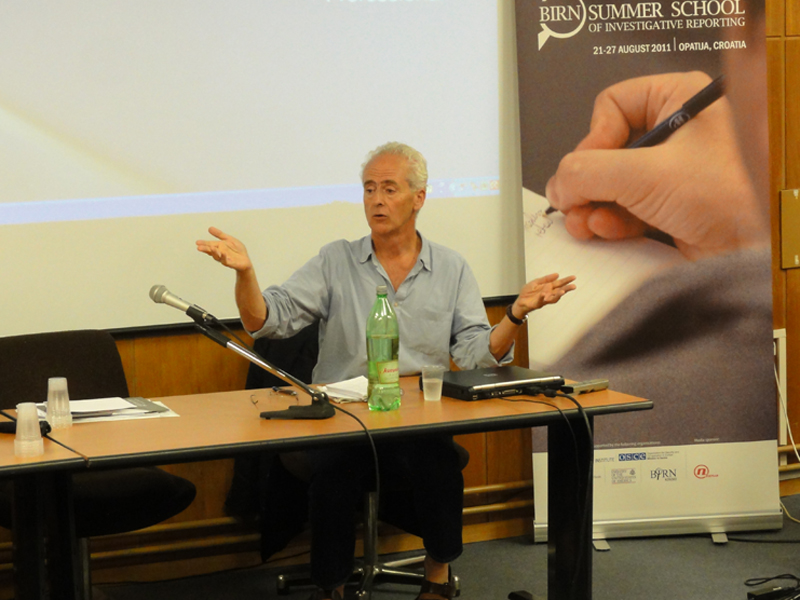 Davies, the journalist credited with virtually single-handedly leading the investigation into the hacking of phones by a British newspaper, also attached the basic tenets of reporting, force-fed to journalists, such as balance and the need to read all other sources of news.

He described this approach as “baffling, breathtaking and hideous”, adding that this led journalists to get “sucked up into a consensus”.

“We miss stories if we focus on this tiny little group of stories,” he added.

He said, instead, that reporters should take a moral judgment on issues and look for the unusual in everyday life.

His pursuit of the vast haul of documents obtained by Wikileaks was, he said, an example of how journalists failed to spot a story.

He said that when the arrest of the alleged whistleblower was covered in the press, reporters focused on this. “Very, very few thought to go to get the secrets,” he said.

Davies added that understanding how a source is thinking, and what he or she needs, is also critical in convincing them to talk.

“The finding of stories starts with the ‘hang-on-a-minute-moment’,” he said, explaining that this is when reporters should spot that the usual order of things is out of place and begin investigating.

On the phone hacking scandal, he said that he had a number of lucky breaks when key documents arrived just when he was facing pressure to prove more of the story.

The use of phone hacking as a journalistic technique would, he said, only be justified in “remote cases of extraordinary importance”.