On the second day of BIRN’s Summer School, journalists heard how to find information about offshore companies, analyse data, use open source information and Freedom of Information laws. 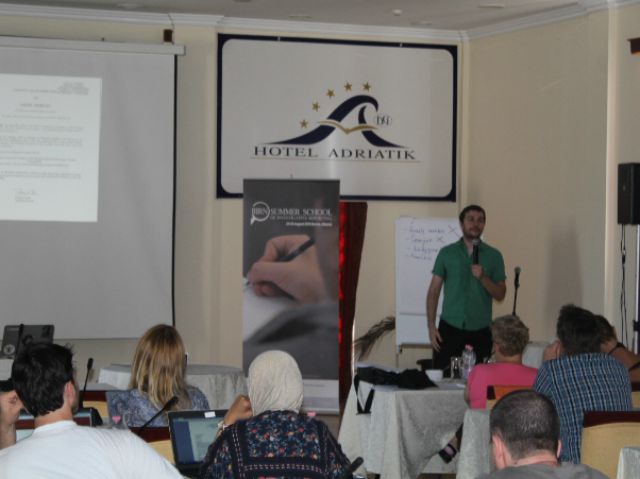 Stevan Dojcinovic, a journalist from the Organized Crime and Corruption Reporting Project (OCCRP), told the journalists attending the Summer School in Durres, Albania on Tuesday about the process of tracking offshore companies and how to find information about some of the most secretive firms.

He explained that sometimes a large number of companies can be registered at the same house or building.

“The question is, do those companies really exist?” he asked.

Mar Cabra, who heads the ICIJ Data & Research Unit, gave a lecture to the journalists about how to organise information properly.

“Try to be practical and make a plan [about] what we want to do and where are our sources,” Cabra suggested.

She presented tools and programmes for organising and sorting data, and suggested that “more stories which we can do are in public documents”.

In the afternoon sessions, participants learned about open source information and social media from Iggy Ostanin, a journalist from the Bellingcat site.

Ostanin showed how new evidence was found that showed that the Buk missile system that was used to shoot down flight MH17 on July 17, 2014 came from Russia. The story was uncovered using information from social media and open source platforms.

“I tried to see where the Buk came from. I started my search with Instagram,” Ostanin explained.

The sixth BIRN Summer School opened on Monday with journalists from all over the Balkans, Bulgaria, Austria, Palestine, Germany and Georgia gathering to learn from leading media experts how to use social media to uncover crimes, skills for cracking open offshore companies and how to make reluctant sources talk.

The training will continue on Wednesday.