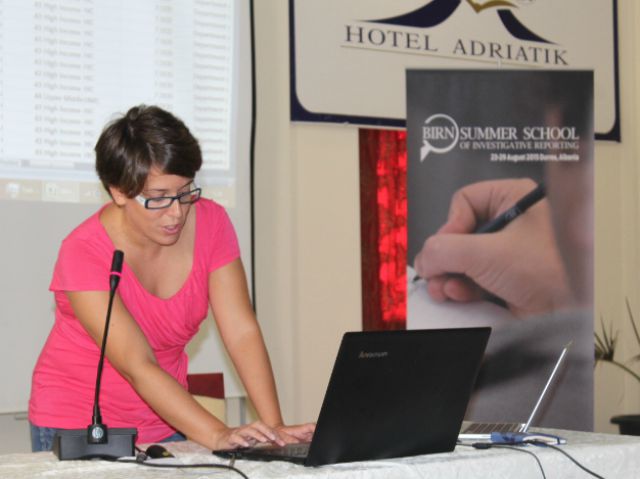 Blake Morrison, the lead trainer at BIRN’s 2015 Summer School in Durres, Albania, give a lecture on storytelling techniques on Wednesday, explaining what is needed to “put the reader into the story”.

Morrison said that reporters need to think about character, plot, chronology, setting and motive, but also about details.

“You need to ask people: ‘Tell me about the moment when you decided to do it,’” explained Morrison, adding that journalists should make readers feel like they were there when the story happened.

“You need to… give them the feeling of that moment,” he said.

After Morrison’s lecture, Mar Cabra from the ICIJ Data & Research Unit gave a presentation on how to visualise data and information about various websites and tools for making simple graphics.

Cabra said that graphics should be selected carefully for maximum impact.

“It is not always easy to choose if you have a lot of numbers and data,” she said.

Miranda Patrucic from the Organised Crime and Corruption Reporting Project (OCCRP) then spoke about her organisation’s investigation into Gulnara Karimova, the daughter of the president of Uzbekistan, and explained how it’s possible to do an investigation from abroad and track people.

“How will you learn about somebody? Talk with people who know her,” Patrucic said.

“When you investigate one person, try to find out more information about this person, what they love, where they are usually travelling,” she added.

She also explained how journalists can make connections between a property and its owner, and detailed what she has done to get information from the Gibraltar and Bahamas offshore zones.

“You need to learn how to read finance statements,” she advised.

Cabra then wrapped up Wednesday’s session by explaining how to stay safe online and what programmes journalists should use to ensure their security.

At the end of the day, the journalists attending the Summer School split into groups to develop ideas for investigative stories.

Around 30 journalists from all over the Balkan and Bulgaria, Austria, Palestine, Germany and Georgia participating in BIRN’s Summer School which is opened on Monday in Durres, Albania.