On the fourth day of BIRN’s Summer School, trainers advised the journalists on how to pitch stories, structure investigative projects and use technology to assist their work. 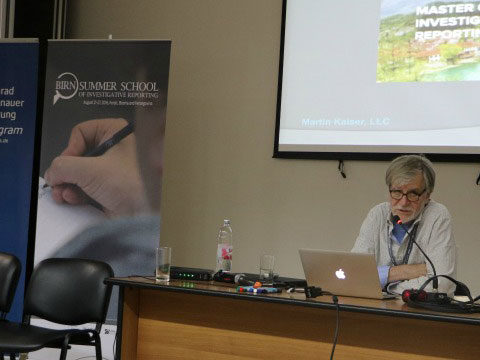 The fourth day of BIRN’s Summer School Master Class of Investigative Journalism in the historic town of Konjic in Bosnia and Herzegovina on Thursday started with a session on pitching story ideas, run by Blake Morrison, lead trainer and investigative projects editor at Reuters.

Blake explained how stories can be pitched to editors without overpromising while bearing in mind all the possible outcomes.

“As reporters, you’ll have real highs and real lows, and we have a job to even them up… Sometimes as investigative reporters we dig a dry well and that’s normal. But nevertheless, we aim to have less of them,” he told the participants.

“Sometimes you work on a story that just doesn’t resonate. And that’s why we have to give them ‘legs’, which will make them have an effect,” he added.

Blake explained that journalist should not promise too much from a story and must be realistic, but nevertheless should believe in the most positive outcome, while not pretending it’s possible to predict every possible outcome of their research.

Blake concluded that journalists should know that they are not alone in their work, and if they do not have editors to support them, they should find support among colleagues or elsewhere.

Lawrence Marzouk, a journalist and editor with Balkan Investigative Reporting Network, BIRN, shed light on a case study about the arms trade from the Balkans and Central Europe to the Middle East, a report that caused serious reactions in the countries mentioned.

“You should first ‘pick the lowest hanging fruit’,” he said, while explaining how the reporting team tracked 1.2 billion euros of weapons sold to Middle Eastern countries.

Marzouk explained how reporters, while researching a “controversial industry” like the arms trade, “have to harvest all the possible open source databases” because the industry is highly regulated, meaning that there is a lot of documentation.

“To find the weakest link in the system, you have to know the system,” he.

Participants then had the opportunity to discuss techniques and databases with Marzouk using the arms trade story as an example.

Miranda Patrucic, an investigative reporter and regional editor with the Organized Crime and Corruption Reporting Project, presented her work connected to the Panama Papers, giving an insight into how the research was done.

Patrucic explained how the offshore industry functions, through proxies, different types of companies, trusts and bearer shareholders. She also explained the interest countries with tax heavens have in allowing offshore companies to operate.

“These island states are very small with small costs. And all the documents for opening offshore companies, such as a certificate of good standing, cost something and the states make a significant profit on it,” she explained.

By showing concrete examples from the Panama Papers, Patrucic explained to the participants how to ‘follow the money’ and the businesses of offshore companies.

The former editor at the Milwaukee Journal Sentinel, Martin Kaiser, ended the day with his masterclass session on investigative journalism.

“First of all, a journalist’s first obligation is to the truth,” Kaiser said.

“[Journalism’s] essence is discipline and verification… it must serve as an independent monitor of power,” he added. “It must provide a forum for public criticism and compromise, meaning you have to listen… We make mistakes and when we do, we correct them.”

He also said that stories must be interesting and relevant.

He explained that contemporary journalism has to use all the newest technologies and tools for writing stories, but underlined that journalists should remain “great storytellers” who “shed light where there was darkness”.

After presenting an outline of his work on a story about the high incidence of drunken drivers in the US state of Wisconsin, Kaiser gave the participants the opportunity to discuss what works and what does not in investigative journalism.

On the third day of BIRN’s Summer School, journalists heard how to harness the power of social media, carry out interviews and develop sources for stories. 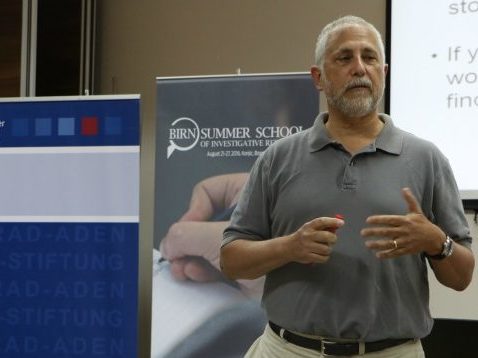 “If you have to approach the person on social media, try to do it over the publication’s [media] account and not your private account, and then people will attack your company and not you,” Myers told participants at the school, held this year in the historic town of Konjic, in Bosnia and Herzegovina.

“In short, everybody we’re investigating is either on Facebook or has family on Facebook. The information you can get from different social networks, websites, directories are offering a mosaic of information that you can wander around […] proving things that need to be proved, finding new information you didn’t have before that will help to develop your stories,” he added.

Blake Morrison, lead trainer and investigative projects editor at Reuters, held a session on the art of interviewing.

Morrison said: “My philosophy on interviewing is pretty simple… Think of it as an important meeting. With a stranger,” explaining that the interviewee needs to “be understood”.

“It’s important to be authentic, because people can tell when someone is unauthentic and misrepresent themselves,” he added.

“If we do a job well, there is nothing to be embarrassed about. That’s the confidence I am talking about,” Morrison said.

“It’s very important to be curious. If you don’t understand something, don’t presume, ask,” he concluded.

He explained that there are three types of interview: information interviews, which involve collecting information on something; accountability interview, asking the person to explain his or her acts; and emotional ones, in which person sheds light on his or her emotional perspective.

Morrison emphasised the need for preparation and gave an insight into why people agree to give an interview: vanity, need to be understood, self-interest, desperation, guilt and curiosity.

Jim Mintz, an adjunct professor of the Stabile Centre for Investigative Journalism at the Columbia Journalism School, spoke about how to develop sources.

“I am here to spur your ambition to go deeper in developing sources,” he emphasised, “and not expose only people that are responsible for wrongdoings, but systems of wrongdoing”.

“All investigative stories start from outside and one wants to get inside. Since things are in the heads of people, one must have skills for developing source,” he added, explaining that journalist must enter a “deep inside a secret world”.

Mintz explained that entering this “secret world” will lead journalists into complicated “mazes” of complex relations and events.

“In this maze, you’ll find people that genuinely can help you, that can guide you,” he said.

Mintz explained that journalists should try to develop genuine relationships with sources.

He concluded that it is very important that journalists work hard in order to gain the trust and respect from sources.

On the second day of BIRN’s Summer School, journalists learned how to creatively structure stories and use various databases and other investigative tools. 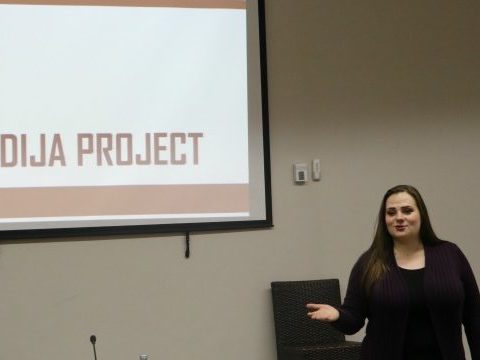 Lead trainer and investigative projects editor at Reuters, Blake Morrison, showed the participants of the BIRN Summer School Master Class of Investigative Journalism in Konjic, Bosnia and Herzegovina on Tuesday how to use a creative approach to structuring stories.

Morrison emphasised the need to persuade people who are sceptical about the narrative.

“Your job is to persuade people who fundamentally disagree with what you say,” Morrison said, underlining the importance of being imaginative when structuring a story.

“I want you to imagine the best story possible. To ask yourselves: ‘What would be the best source [for the story] imaginable that’s out there,’” he said.

“You need to believe that you’re able to make any story possible… but you need to manage your stories possible,” Morrison told the participants.

He explained how all investigative stories should be explained within six words and can be described using three questions: what is the issue, what is the harm and who is to blame.

Morrison concluded that journalists have to ask themselves the “so what?” question – why is something important – and “why now?” question, which explains the importance of the story at that moment in time.

Also on Tuesday, Crina Boros, a watchdog reporter from Centre for Investigative Journalism, continued her training on data journalism, answering questions from the participants through stories she has covered over the years.

She showed the participants how to use public registers and databases while writing stories.

Miranda Patrucic, an investigative reporter and regional editor with the Organized Crime and Corruption Reporting Project, also held an interactive lecture on how to ‘follow the money’ and find sources for stories abroad.

She presented The Khadija Project – named after Azerbaijani investigative journalist Khadija Ismayilova, who was imprisoned in Azerbaijan after reporting on the financial schemes of President Ilham Aliyev’s family.

“One day she [Ismayilova] took part in a training, like the one you will get today, and learned how to follow the money abroad,” Patrucic told the participants.

She did an exercise about tracking money and companies through various databases, both open-source and paid-for.

Paul Myers, an expert in using social media for investigations, did a presentation on technical sites, tools and techniques. He showed how keywords are searched on Google and through social media, cutting the number of search results.

“Logic dictates search on Google, so you have to think what you search and discover logic behind it and look for that in Google,” he explained, while showing practical examples.