Gavin Rees is the director of Dart Centre Europe, a not-for-profit media organisation that is dedicated to supporting informed, innovative and ethical news reporting on violence, conflict and tragedy 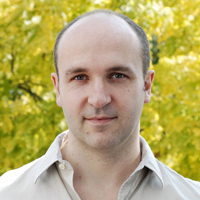 The Centre operates as part of a global, interdisciplinary network of news professionals, mental health experts, educators and researchers who work in such areas as crime, family violence, natural disaster, war and human rights.

Over the last 15 years Gavin has worked in a variety of broadcast media, producing business and political news for international networks, as well as working on drama and documentary films for the BBC, Channel 4 and other broadcasters.

During this work Gavin has developed a specialist interest in understanding and teaching the dynamics of interview situations and, in particular, how journalists might best approach vulnerable people who have been affected by traumatic violence or structural poverty.

Gavin is a former Research Fellow at Bournemouth Media School and was a leading member of the production team for the BBC documentary drama, Hiroshima, which won an international Emmy in 2006.