Jeta Xharra is the BIRN Kosovo Director and presenter and editor of the television debate show “Life in Kosova”, a program that has for the last five years pushed out the boundaries of debate, opening up taboo subjects that Kosovo society previously shied away from discussing. It has become the most watched current affairs program in Kosovo. 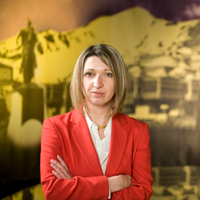 Xharra entered journalism as a fixer/field producer during the war for BBC News and Channel 4 in 1998 and later became the manager of the BBC Kosova Bureau. During the NATO campaign in 1999, she worked for BBC News in Albania, Macedonia, and Kosovo.

She completed an MA in War Studies at King’s College London (2000), and gained an MA in Screenwriting from the London College of Printing with distinction (2002).

While completing her studies in the UK, Jeta Xharra worked part time as Assistant Editor for the Newsgathering Planning Team in the BBC World Service news in London and for Institute for War and Peace Reporting.

Xharra has written for international publications, including The Independent, The Economist, Sunday Telegraph and Janes Intelligence Review.

In the UK, Xharra worked for the Foreign News Planning Desk at the BBC World Service, returned to Kosovo in 2003 where she became one of the founders of the Balkan Investigative Reporting Network.