Mar Cabra, Spain, is the head of the Data & Research Unit, which produces the organization’s key data work and also develops tools for better collaborative investigative journalism. She has been an ICIJ staff member since 2011, and is also a member of the network. 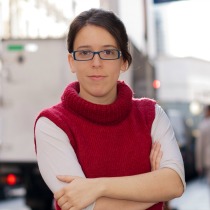 Mar fell in love with data while being a Fulbright scholar and fellow at the Stabile Center for Investigative Journalism at Columbia University in 2009/2010. Since then, she’s promoted data journalism in her native Spain, co-creating the first ever masters degree on investigative reporting, data journalism and visualization and the national data journalism conference, which gathers more than 500 people every year.

She previously worked in television (BBC, CCN+ and laSexta Noticias) and her work has been featured in the International Herald Tribune, The Huffington Post, PBS, El País, El Mundo or El Confidencial, among others. In 2012 she received the Spanish Larra Award to the country’s most promising journalist under 30. (PGP public key).