Nick Thorpe is an award-winning writer and journalist. A contributor to the Sunday Times, Daily Telegraph, Guardian, Independent, Scotsman and BBC Radio 4 among others, he has covered stories ranging from Russian presidential elections to the coca wars of Bolivia, for which he was shortlisted for the Martha Gellhorn Prize for Journalism. 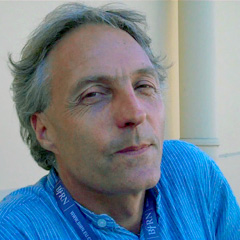 His bestselling book, Adrift in Caledonia: Boat-hitching for the Unenlightened, is the story of his 2500-mile journey around Scotland on other people’s boats. It was published by Little Brown and serialised on BBC Radio 4’s Book of the Week programme in March 2006.

Eight Men and a Duck, his critically-acclaimed first book, recounts his voyage to Easter Island by reed boat and was published by Abacus in 2003. He is currently working on a new book called Relax or Die: Adventures in the Lost Art of Letting Go, due for publication in 2011.

Born in 1970, Nick grew up near London but moved to Scotland more than 15 years ago. He lives in Edinburgh with his wife and young son. His obsessions include Six Feet Under, the meaning of existence and things that float.