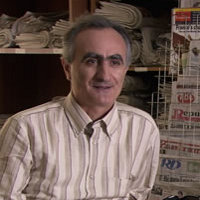 A graduate of Tirana University, Faculty of Philosophy. Lani was also a correspondent for the Spanish newspaper ‘El Mundo’ between 1991   1993; and for ‘Zeri’ newspaper, in Pristina, between 1993 and 1995.

Lani currently works as the Executive Director of the Albanian Media Institute and is also editor of the Alternative Information Network in Tirana, the first President of the South East Network of Media Centers and Media Institutes, which brings together 17 organisations in SEE and is a founding member of the first Human Rights Group in Albania (The Forum for Human Rights).

Lani has worked with the Aspen Institute, Berlin, the Istituto Affari Internationali-Rome, CESPI-Rome, the Center for International and Strategic Studies- Washington, the Carter Center- Atlanta, and the Hellenic Foundation-Athens on a range of Balkans related projects and has participated in numerous conferences, seminars and post graduate qualification courses in Albania, the USA, Greece, France, Spain, Denmark, Germany, Italy, England, Hungary, Macedonia, Poland and Turkey.