Tamara Causidis – is a freelance journalist and an activist for press freedom.  She is the president of the Trade Union of Macedonian Journalists and Media Workers (SSNM). 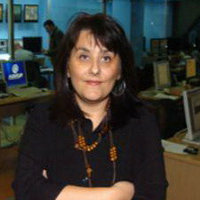 Causidis began her journalist career in 1988 as a reporter for Macedonian National Radio. She later became a news anchor and editor and in May 2001, joined the South Slavic department of Radio Free Europe. She worked as a correspondent during the ethnic conflict in Macedonia and became a permanent member of the Macedonian department of Radio Free Europe in September 2001. Causidis was also an editor in the Macedonian BIRN office and a producer and editor at ALSAT-M TV, the only bilingual media in Macedonia.

During her career, she became involved in promoting professional standards, human rights and press freedom issues in Macedonia. She was elected President of the Council of Honor at the Macedonian Journalists Association from 2006-2009. She is also a co-author of the Journalism Ethics Manual.

As the president of SSNM, she is involved in promoting professional standards as a precondition for press freedom.