Zeljko Ivanovic is a Montenergian journalist and managing editor, co-founder and co-owner of Vijesti, the first independent daily newspaper in Montenegro, since 1997 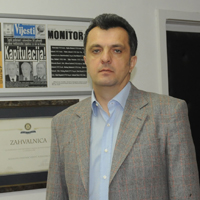 Currently, he works on the editorial policy of the newspaper, management and human resources policy and oversight of the editoral team and is responsible for developing and coordinating the editorial and commercial side of Vijesti publishing.

Zeljko also was manging director of Monitor, the leading and only independent current affairs weekly news magazine covering Montenegrin and regional politics, from 1990 till 1997. He was editor-in-chief of Alternative Informative Network, a network of journalists and media people from all over the former Yugoslavia that covered events during the wars in the former Yugoslavia.

He also worked as an editorial assistant for NIN in Montenegro and he, along with his friend founded KRUG the first political magazine in Montenegro. The magazine covered issues related to civil society and the wars in the
former Yugoslavia, with a strong anti-war slant.